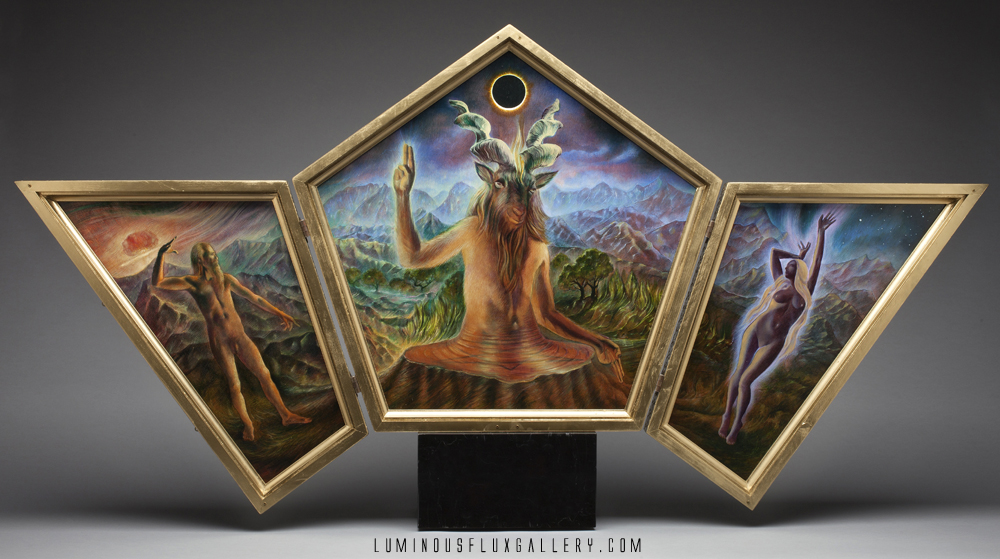 Anima Mundi was created especially for a traveling international exhibition of Visionary Art called The Garden of Fernal Delights, curated by Liba W. Stambollion.  This show was accompanied by the release of a book, which has its own mythology, complete with it’s own written and spoken language called “Fernalese”, invented by artist Bruce Rimell.

From the Encyclopædia of Fernal Affairs:

“The Garden of Fernal Delights is a sublime and paradisiacal place where all the wonders of the natural world from the sexual to the surreal, the visionary to the instinctive, are celebrated as fundamental joys of being alive.  The Garden is a multidimensional place where all is conscious and divinely intelligent from the animal to mineral to vegetable to the aetheric.  This Garden of Delights knows no violence, no notion of original sin, no hierarchy, no fixed temporal system.  Rather, it is a place of magic, of play and playfulness.  It resides in the Garden of the heart and has no limit to its creativity.”

An excerpt from one of my favorite descriptions of Baphomet, by Peter J. Carroll:

“Baphomet is the psychic field generated by the totality of living beings on this planet. Since the Shamanic aeon, it has been variously represented as Pan, Pangenitor, Pamphage, All-Begettor, All-Destroyer, as Shiva-Kali — creative phallus and abominable mother and destroyer — as Abraxas — polymorphic god who is both good and evil — as the animal headed Devil of sex and death, as the evil Archon set over this world, as Ishtar or Astaroth — goddess of love and war — as the Anima Mundi or World soul, or simply as “Goddess.” Other representations include the Eagle, or Baron Samedi, or Thanateros, or Cernunnos — the horned god of the Celts.

“The appellation “Baphomet” is obscure, but probably arises from the Greek Baph-metis, union with wisdom. Gods with Baphometic names and images reoccur throughout Gnostic teachings. No image can fully represent the totality of what this force is, but it conventionally shown as hermaphrodite god-goddess in the form of a horned human that includes various mammalian and reptilian characteristics. It should also resume protozoan, insectivorous, and floral symbolism for it is the animating spirit of everything from a bacterium to a tiger.  If we succeed in creating machine consciousness, it will have to include mechanical elements as well. Between its horns a torch is usually positioned, for spirit is most easily visualized as light. The image should also include necrotic elements for it also encompasses death. Life and death are a single phenomenon through which the life force continually reincarnates. A denial of death is also a denial of life. The cellular mechanisms which allow life also make death inevitable, essential and desirable. All religions which deny death are basically anti-life. Have no fear – you have been, and will be millions of things; all you will suffer is amnesia. The sexual aspects of the god-goddess Baphomet are always emphasized, for sex creates life, and the sexuality is a measure of the life force or vitality, no matter how it is expressed.”

In this painting, Baphomet represents the all-creative, life-animating spirit, summoned to re-grow the Garden from the tree of knowledge / tree of life, after it has been clear-cut by the forces of Ignorance.  His upward and downward pointing hands represent mercy/compassion/goodness and justice/judgement/discernment (i.e., the ability to withhold mercy when it is clear that the good will be misused). ~Aloria Weaver