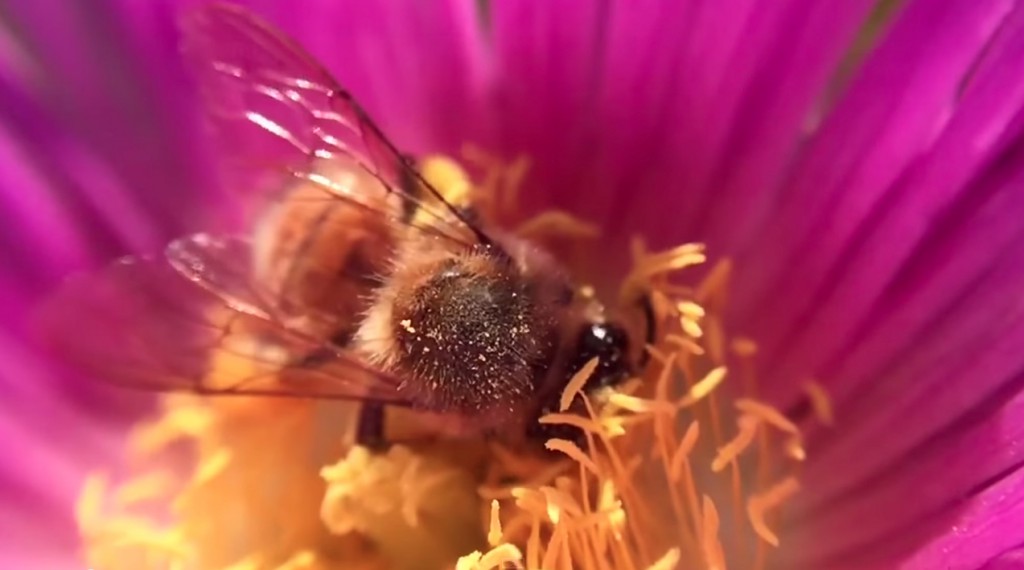 Don't Play With Your Food

Bee Collecting Pollen Video – A bee feasting and working in an ice plant flower filmed with an iPhone6 and an Olloclip 10x macro lens on Slo-Mo 240 FPS.

How much honey does the average worker honey bee make in her lifetime?

1/12 teaspoon. Most worker bees only live for around six weeks in the summer and they can only go and forage for nectar on days when the air temperature is above ten degrees Celsius (50 degrees Fahrenheit). A group of about 12 bees in their lifetime will produce a teaspoon of honey between them. Bees use their honey as an energy source for the hive. Depending on the weather, a hive might use over 20 kilograms (44 pounds) of honey over a single winter.

Honey bees collect pollen and nectar in the spring when most flowers and plants are in bloom. They use their long, tubelike tongues like straws (called proboscis) to suck the nectar out of the flowers and they store it in their stomachs and carry it to the beehive. While inside the bee’s stomach for about half an hour, the nectar mixes with the proteins and enzymes produced by the bees, converting the nectar into honey.

In the hive, pollen is used as a protein source necessary during brood-rearing. Honey bees, signifying immortality and resurrection, were royal emblems of the Merovingians, revived by Napoleon. The bee also is the heraldic emblem of the Barberini.